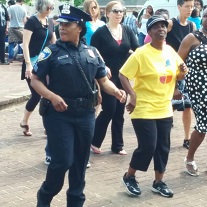 We see our parish of St. Peter Claver as a refuge—a sacred space for conversation—where faith encounters the problems and realities that face the Sandtown neighborhood of West Baltimore. Four years ago, we helped form the No Boundaries Coalition (NBC), which has helped bring our faith into conversation with the realities around us. NBC now receives funding from the Catholic Campaign for Human Development. We began to open our parish doors for conversations about violence, community-police relations, and other issues we face. We began regularly joining Bishop Madden and other faith groups on prayer and visibility walks, to stand against violence and crime. Our most recent walk drew 150 people to witness and pray at the seven latest murder sites. After the 2015 death of Freddie Gray, we served as a meeting place for 150 faith leaders and community members to gather and plan our response. We helped distribute 10,000 pounds of food and supplies and mobilized 1,000 volunteers to clean up the community. After the riots, we interviewed residents in the area where the Gray incident had occurred, documenting their testimonies about police misconduct. When the Department of Justice later became involved, our report assisted their work. With Catholic Charities, we implemented a Safe Streets Program to train “violence interrupters”—trusted people within the community—to de-escalate tense situations that could turn violent. We regularly assist in a racial justice circle process, which includes participants from within and outside Sandtown and seeks to explore oppressive systems and privilege. Finally, our pastor, who is heavily involved in our work for peace, preaches often on our call, as Catholics, to be involved in this work. Following the Gray incident, Fr. Ray helped form “Clergy United to Transform Sandtown,” which brings together clergy from churches across the neighborhood, to work to address these issues together.